This is the fifth and final post in a series documenting trends in consumer credit outcomes during the COVID-19 pandemic. This post focuses on access to new credit—the share of new credit applications that result in new accounts and the amount of credit that is extended to consumers who open new accounts. During the last recession in the late 2000s, creditors sharply pulled back on the availability of all types of credit to reduce their risk. In a report we released in August 2020, and updated in earlier post in this series, we showed there was not a pronounced reduction in available credit card credit since the start of the COVID-19 pandemic, although credit limit increases seem to have been halted for many consumers. However, because of lags in the reporting of new accounts, the August 2020 report did not discuss trends in access to new credit.

As in previous posts in this series, we use the Bureau’s Consumer Credit Panel (CCP), a de-identified sample of records from one of the three nationwide consumer reporting agencies. We look at two key outcomes: First, we look at the probability that a hard inquiry on a consumer’s credit report is “successful,” meaning that it is followed by a newly opened account shortly after (credit card inquiries that are followed by a substantial limit increase are also considered successful). Note that when inquiries are not successful, we do not know whether the creditor denied the application or the or the credit was offered on terms the consumer did not finds acceptable, nor do we know why applications were denied. In addition, not all credit applications result in a hard inquiry (or do not result in a hard inquiry to all three nationwide consumer reporting agencies), so the volume of inquiries and the rate of successful inquiries may differ from application approval rates in other data sources such as the Home Mortgage Disclosure Act data. Second, we examine trends in the original credit limit or principal balance of accounts that are successfully opened. The methodology for classifying inquiries as successful or unsuccessful is described in more detail in this paper.

Access to new credit tightened for credit cards, but loosened for mortgages and auto loans 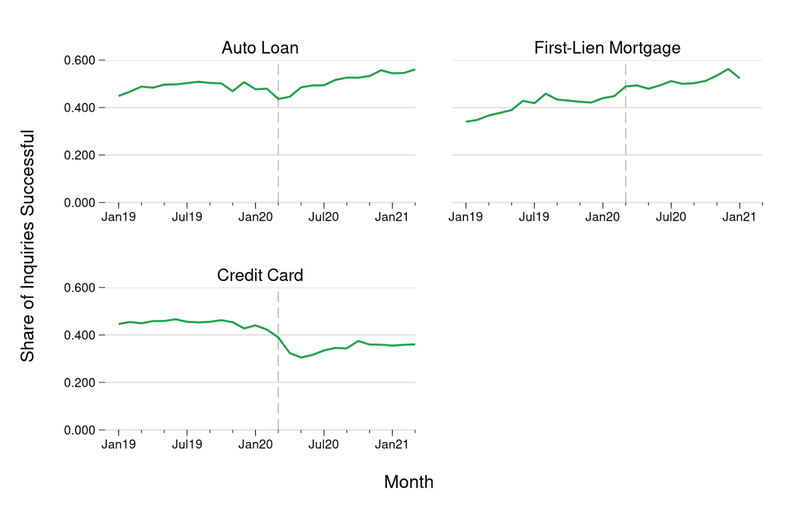 The figure above shows the share of hard inquiries that were followed by a new account or limit increase within 14 days (for credit cards and auto loans) or 120 days (for mortgages), from January 2020 through February 2021, with a vertical dashed line marking the start of the pandemic in March 2020. In previous posts in this series we used data through April or May 2021, but since it can take several months for new credit accounts to be reported on consumers’ credit reports we exclude the last few months of data. In the early days of the pandemic, the success rate of credit card inquiries fell dramatically from around 45 percent in January 2020 to just over 30 percent in May of 2020. This drop is well beyond what could be expected from seasonal variation—this proxied success rate for credit card inquiries was around 45 percent for all of 2019. Credit card inquiry success rates have risen since May 2020 but are still well below the pre-pandemic average. At the same time, we do not observe any corresponding drop in success rates for auto loans or mortgages. For auto loans there was a small and transitory dip in March and April 2020, but by February 2021, the success rates for auto loan and mortgage inquiries was well above pre-pandemic levels. This result for auto loan and mortgages inquiries contrasts somewhat with responses to the Federal Reserve’s survey of bank loan officers, which indicate that large banks tightened lending standards on auto and mortgage loans during 2020, only loosening standards in 2021.

The volume of credit card inquiries fell substantially early in the pandemic and did not recover until March of 2021. In contrast, auto loan inquiries fell in the early months of the pandemic, but rose above pre-pandemic levels in the summer of 2020. It is possible that the consumers who were applying for credit cards in during the pandemic were not the same types of consumers as were applying for credit before the pandemic, and this may partly explain the change in success rates. That is, the pattern in the figure would also be consistent with credit card issuers making no change to their credit standards, but fewer consumers with a high likelihood of success applying in the first place. However, credit card inquiry success rates similarly declined across credit score groups as well as across age groups and subgroups of consumers classified by their census tract or county characteristics (not shown). In addition, survey responses from bank loan officers suggest that lending standards for new credit cards did tighten substantially in 2020. The decline in credit card inquiry success rates combined with the continued depressed rate of credit card inquiries also means that the volume of new credit cards has fallen substantially—consistent with the results in our earlier post that aggregate credit limits have stagnated or fallen.

Credit limits on new credit card accounts have declined, but principal amounts on new auto loans and mortgages have risen 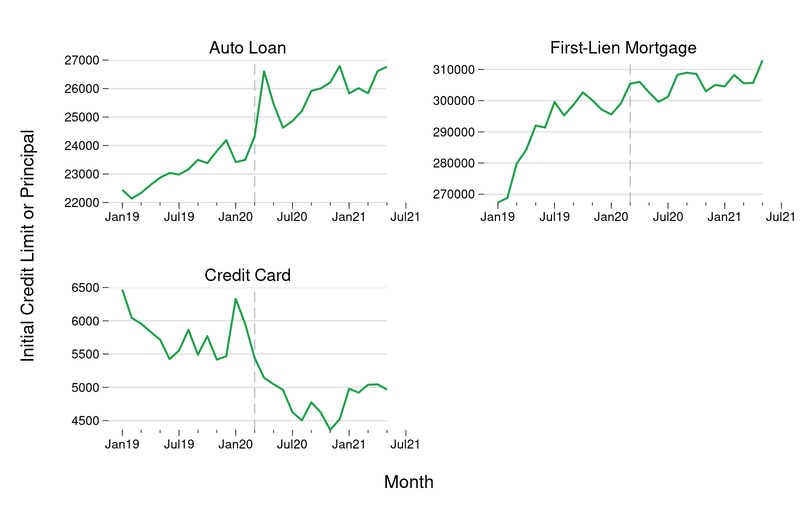 This is the last post in our summer blog series documenting the effects of the COVID-19 pandemic on consumer credit outcomes. Broadly we found a continuation of the trends from our August 2020 COVID Special Issue Brief: Delinquencies remain low, payment assistance is falling but remains high, credit card utilization remains low, and access to credit card credit has declined. It remains to be seen if these trends will continue or will reverse as policies such as extended unemployment insurance and payment assistance under the CARES Act end. It also remains to be seen whether any of these trends will continue as long-term changes to the way consumers use credit. Importantly, all the trends we have discussed in this series focus on outcomes for consumers with credit records, and only for obligations that show up on their credit records. As one important example, new delinquencies on mortgages may be low (likely because of payment assistance under the CARES act), but renters don’t have mortgages, and credit records can’t speak to the risk of eviction for consumers behind on their rent. The decline in credit card utilization we documented doesn’t speak to payment difficulties that consumers without credit cards may be experiencing (although other sources have documented reductions in spending from checking account data). This series is at an end, but Bureau researchers’ focus on consumer credit outcomes will continue.