In this post we examine whether credit has tightened on existing credit card accounts. Due to the large unemployment and income shocks that occurred as a result of the pandemic, households may have been less likely to repay their debt, and in turn, financial institutions may have begun limiting households’ access to credit as occurred during the Great Recession. In this post, we examine whether financial institutions cut limits or closed accounts during to the pandemic.

As in the other posts of this series, we use the Bureau’s Consumer Credit Panel (CCP), a de-identified sample of records from one of the three nationwide consumer reporting agencies. See the August report for more details on the methodology in this post.

Total Limits on Credit Cards Have Declined During the Pandemic for Borrowers with the Highest Credit Scores, Stagnated for Others 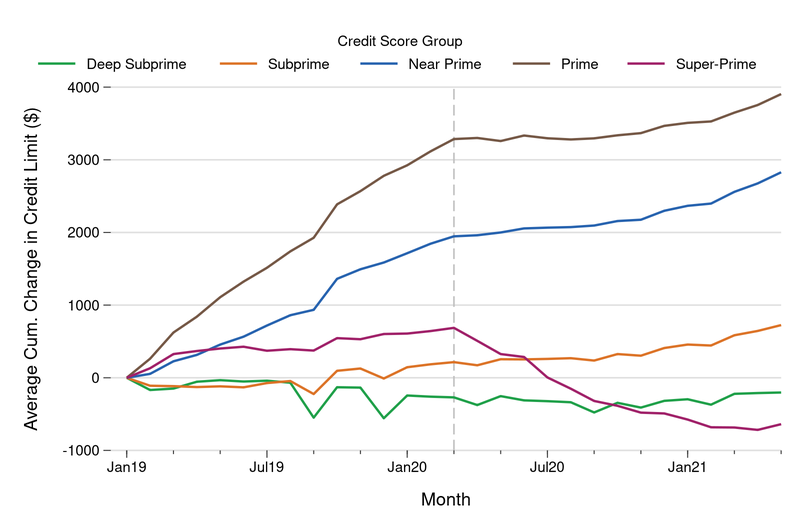 In the figure above, we report the average cumulative change in consumers’ total credit limits for all accounts, including opened and closed accounts, broken out by borrowers’ pre-pandemic credit scores (generally as of December 2018). Beginning in March 2020, credit limits for prime and near prime borrowers broke with their previous upward trend and largely flattened out. Starting in February 2021 limits began to grow more quickly for these groups. In contrast, super-prime borrowers had substantial overall reductions in credit limits after March 2020, and this trend has continued in recent months. The average super-prime borrower in May 2021 had about $640 less credit card credit available than they had at the beginning of 2019 and $1,320 less than the peak in March of 2020. Credit card limits for subprime and deep subprime borrowers seem to changed little during the pandemic. 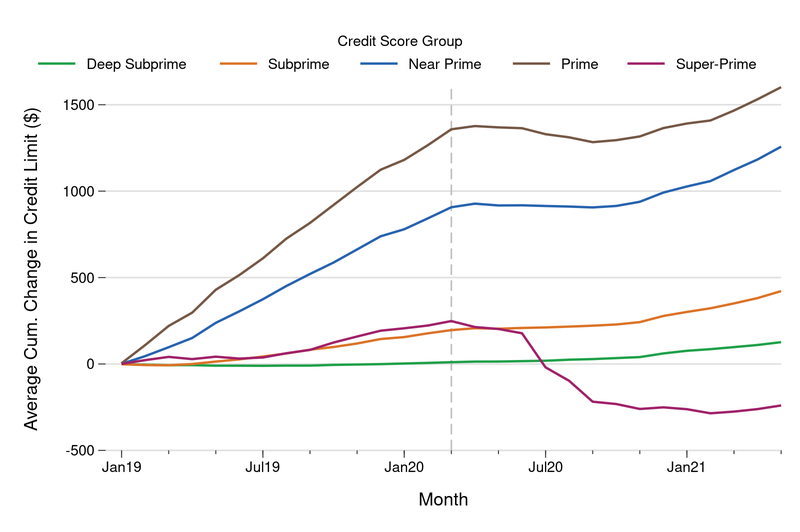 The discussion above considers changes in total credit limits across all credit card accounts belonging to a consumer, including the effect of opening new accounts and closing existing accounts. While this captures the full credit card resources available to the consumer, it is also of interest whether credit card issuers are reducing limits on existing cards. The figure above reports the average cumulative change in consumers’ total credit limits for existing accounts (not counting new accounts or closed accounts), again broken out by borrowers’ pre-pandemic credit scores. We again observe a steady increase in average credit limits for all score groups from January 2019 through February 2020. However, credit limits on existing cards largely flattened out for all credit score groups beginning in March 2020. Super-prime borrowers are the only score group with substantial reductions in credit limits as the average amount of credit available to these consumers fell by about $500 by May 2021 compared to March 2020. The data show a flattening of credit limits for prime and near prime borrowers—a substantial break-in-trend compared to the upward trajectory shown prior to March 2020. However, toward the end of 2020, prime and near prime borrowers credit limits resume their upward trend. There was almost no change in credit limits for subprime and deep subprime borrowers, though the trend ticks upward toward the end of 2020. 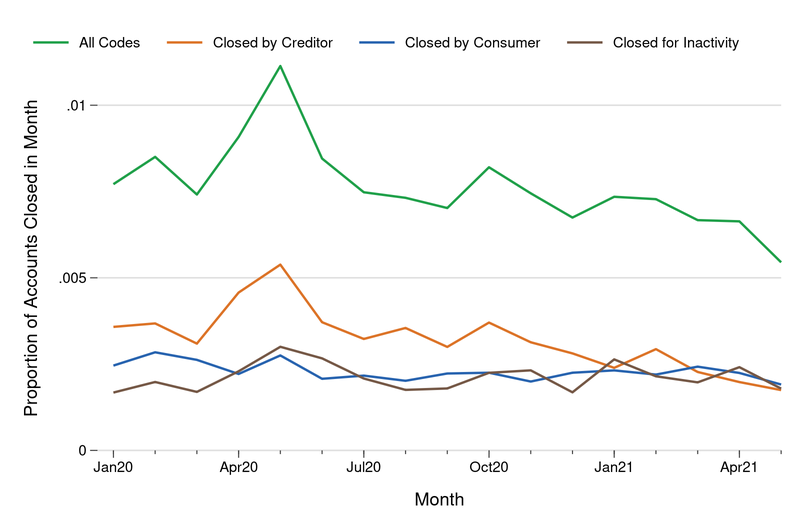 In the August report, we found there was a sharp increase in accounts being closed by creditors in the first months of the pandemic. In the figure above, we report the total share of accounts that close each month from January 2020 to May 2021 and the share broken down by the reason for closure. The spike in accounts being closed early in the pandemic appears to have been short-lived: After the spike in closures in May 2020, the total number of account closures declined through July and then returned to pre-COVID-19 levels through at least May of 2021.

In summary, although financial institutions reduced access to credit card debt early in the pandemic, increases in credit limits have largely resumed their previous upward trends and levels of account closures have essentially returned to pre-COVID-19 levels. However, if interest rates rise as the economy recovers, this could slow the rate of growth in available revolving credit limits if banks’ cost of lending rises. Further research may examine whether credit access fully resumes its pre-pandemic trajectory or whether the pandemic credit crunch had lasting effects on some households. In next post in this series we will explore how the pandemic has affected consumers’ access to new credit. For the earlier posts in the series, see here, here and here.