As in previous posts in this series, we use the Bureau’s Consumer Credit Panel (CCP), a de-identified sample of records from one of the three nationwide consumer reporting agencies. We also use data from the Board of Governors of the Federal Reserve System's Y-14M Credit Card data collection, which includes de-identified monthly level data for credit card issuers with assets exceeding $50 billion and accounted for just under 70 percent of outstanding credit card balances as of year-end 2020. 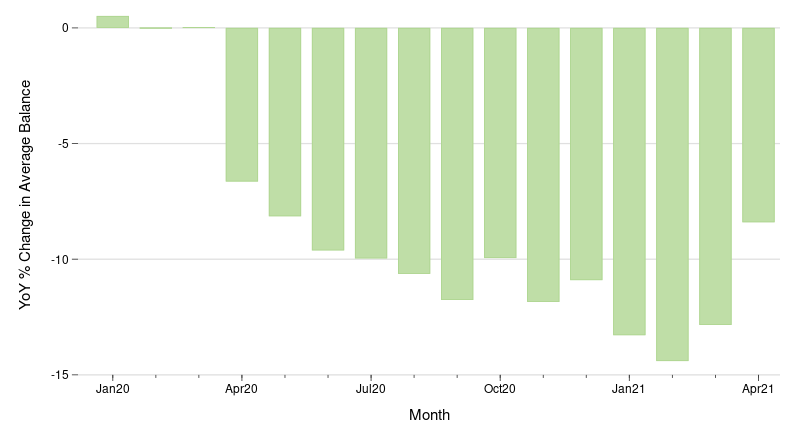 The figure above plots the year-over-year change in the average balance across all general-purpose credit card accounts in the CCP. The average credit card account balance fell dramatically in the early months of the pandemic for all groups, and there is no evidence of a sustained increase since June of 2020. By March of 2021, average credit card balances were almost 13 percent lower compared to one year earlier in March 2020. Average balances were about 8 percent lower in April 2021 compared to April 2020, despite average balances in April 2020 already being substantially lower compared to April 2019. It has been well documented elsewhere that consumer spending has declined overall, but that the decline in spending has not been equal across high- and low-income households. It is possible that the overall decline in balances shown above reflects reductions in spending among employed consumers and masks increases in balances for those who became unemployed. However, the trends in credit card balances were similar for consumers in counties with both large and small increases in unemployment during the pandemic. Indeed, the credit card balances of consumers residing in counties with the largest increases in unemployment were about 14 percent lower in March 2021 compared to March 2020, whereas for consumers residing in counties with the smallest changes in unemployment, credit card balances declined by about 11 percent (not shown). Breaking down the change in average balances by other groupings, including census tract racial and ethnic composition, census tract income, county-level COVID-19 case rates, and pre-pandemic credit score all show essentially the same trends as in the figure above—a pronounced drop in the early months of the pandemic and a continued decline since July of 2020.

Credit Utilization Rates Have Declined During the Pandemic

During the Pandemic, Fewer Consumers Used Credit Cards for Borrowing 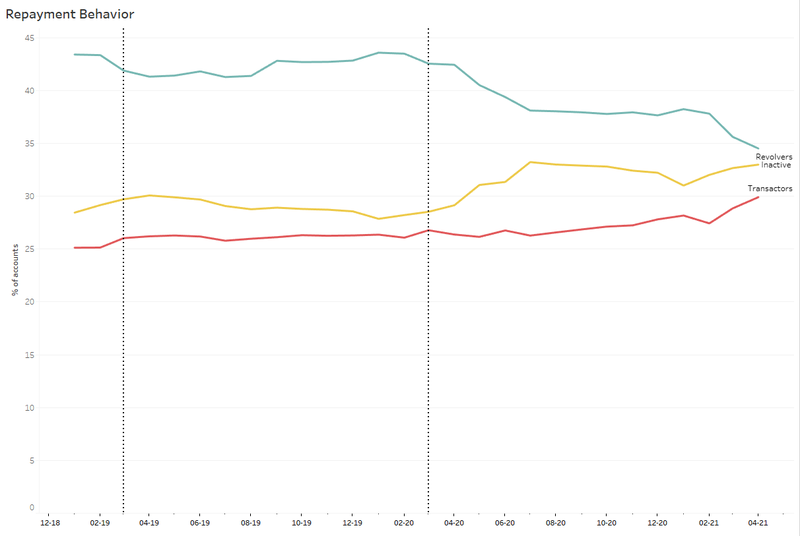 The figure above shows the share of general purpose credit card accounts that were paid in full (“transactors”), the share that had some unpaid balance (“revolvers”), and the share that had no balance at all (“inactive”), from January 2019 through March of 2021. The share of revolver accounts declined from around 43 percent to 38 percent in the early months of the pandemic and continued to decline through April of 2021, reaching 34 percent. Many of these accounts seem to have transitioned to being inactive, as the share of transactors was relatively stable over the same period, although it has been climbing in recent months. At the same time, there was no increase in the share of accounts paying only the minimum payment, whether revolving or transacting (not shown). Against this backdrop, the Y-14 data show an initial decline in purchase activity starting in April of 2020 and a subsequent steady increase throughout the remainder of 2020, back to pre-pandemic level. So, even though the share of revolving accounts declined, and the share of inactive accounts increased, the recovery in purchase activity indicates that those accounts that remained active were used with greater intensity through April of 2021.

The CCP and Y-14M data cannot directly capture whether consumers who have been hit hard by the pandemic are accumulating credit card debt. However, previous work by Bureau researchers has found that even consumers who were experiencing financial difficulties before the pandemic reduced their credit card balances during the early months of the pandemic. If consumers are turning to credit card debt to supplement lost income due COVID-19, it is not occurring in a widespread manner that is showing up in the data. As we have discussed in previous posts in this series, that may change as programs providing payment assistance and stimulus payments end or are phased out. In the next post in this series, we will discuss trends in credit limits and the availability of credit on existing credit card accounts. You can find the previous posts in the series here and here.