In a new report in our Making Ends Meet series, we find that consumers who use a payday, auto title, or pawn loan in one year are often still using that type of loan a year later. Some users of these services have lower cost credit available on credit cards, while others lack access to traditional credit. Among payday, auto title and pawn loan borrowers who experience significant financial shocks, the costs of these shocks often exceed other possible sources of funds.

We use questions about payday, auto title, and pawn loans in the first two waves of the Bureau’s Making Ends Meet survey, conducted in June 2019 and June 2020, to examine how consumers use these services. The survey’s sample is drawn from traditional credit bureau data, so the survey does not provide insight into users of these services who do not have traditional credit records. But it does allow us to examine other credit characteristics such as whether these consumers appear to have readily available credit on credit cards. The Making Ends Meet survey thus gives us a rare opportunity to combine a survey of the same consumers over two years with traditional credit record data to understand consumers’ decisions about debt.

Rollover or repeat borrowing is common

FIGURE 1: SHARE OF POPULATION THAT STILL OWED MONEY ON THIS TYPE OF LOAN, IF HAVE TAKEN ONE OUT IN SIX MONTHS PRIOR TO JUNE 2019 (PERCENT)

Use in the early months of the pandemic

Payday and pawn loan use appears to have fallen in the first months of the pandemic. We asked about these loans over the six months before wave 1 (June 2019) and the 12 months before wave 2 (June 2020). Despite doubling the time period covered, the report shows that the share of consumers who had taken out a loan in the 12 months before June 2020 increased only slightly compared to wave 1. But in June 2020, the share of consumers who still owed money on a pawn loan halved and the share who still owed money on a payday loan fell by nearly one quarter, suggesting that many consumers had repaid them. (The longer time period covered in June 2020 may also have allowed consumers who took loans out more than six months ago longer to repay.)

FIGURE 3: CONSUMERS WHO STILL OWE MONEY ON A PAYDAY, AUTO TITLE, AND PAWN LOAN WHO HAVE AT LEAST $300 IN AVAILABLE CREDIT CARD CREDIT (PERCENT)

More than half of payday and auto title borrowers with a traditional credit record have credit cards in Figure 3. About a third have more than $300—about the size of typical payday loan—in available credit card credit.

But many users struggle to access credit. A majority of payday, auto title, or pawn users in the survey have poor or very poor credit scores, although a quarter have good or excellent scores. Sixty percent of users of these services report being turned down for mainstream credit or not granted the full requested amount (Figure 4).

FIGURE 4: PERCENT OF CONSUMERS TURNED DOWN FOR MAINSTREAM CREDIT OR WHO DID NOT APPLY BECAUSE THEY THOUGHT THEY MIGHT BE TURNED DOWN 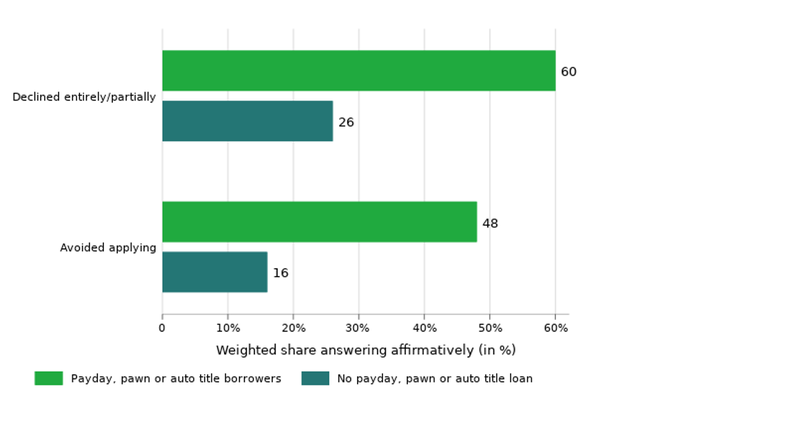 Three quarters of payday, auto title, and pawn users report experiencing both a significant income or expense shock and difficulty paying a bill or expense in the previous year. We examine the income and expenditure shocks that trigger difficulties for consumers in paying bills and expenses. For payday, auto title, and pawn users, these shocks tend to be larger than other available credit or savings sources.

Payday, auto title, and pawn users who experience difficulty paying a bill or expense tend to also use other available credit, suggesting that for some consumers, these loans might be part of a broader and more complicated debt portfolio to deal with difficulties. For users of these loans, getting the money quickly, lack of a credit check, and not wanting “anybody to know that I needed money” were important for deciding on their credit source.

Other reports in this series studied consumers’ status before the pandemic, their savings and preparation for emergencies, the credit card debt of financially vulnerable consumers during the pandemic, and how financial status has changed during the initial months of the pandemic. The next wave of the Making Ends Meet survey is under way and will help us better understand how consumers have fared since June 2020.