Before the pandemic, many households were financially fragile. Half of consumers reported they could cover expenses for only two months or fewer if their household lost its main source of income. Nearly 40 percent had difficulty paying a bill or expense in the 12 months before June 2019 . So when the number of unemployed consumers nearly quadrupled from 6.2 million in February 2020 to 22.5 million in April, many American consumers were just steps away from financial disaster.

Surprisingly, the average consumer’s finances improved sharply early in the pandemic and continued to improve through June 2021. In a new report, we show that pandemic policies such as unemployment insurance kept many people from suffering financial hardship. Many households also benefited from pandemic-specific loan and rent flexibilities. The consumers who received these flexibilities were generally exhibiting a high level of financial hardship.

Of course, averages do not tell the story for every individual family, and many people who experienced hardship did not receive assistance. Pandemic economic policies did not reach everyone. Many of these policies have ended or are ending soon, so consumers’ finances could deteriorate as the programs that supported them throughout the pandemic end. The CFPB will continue its work to protect the financial health of workers and families by ensuring that markets for consumer financial products are fair, transparent, and competitive.

We use three waves of the CFPB’s Making Ends Meet survey and its association with credit bureau data (CCP) to examine how consumers’ financial status changed during the pandemic. We find that consumers’ financial well-being scores improved on average through the end of the survey period (February 2021). During this period, the share of consumers with difficulty paying a bill or expense declined. Using the credit bureau data to follow consumer financial well-being through June 2021, we find that credit card debt fell even for financially vulnerable consumers early in the pandemic and continued to fall at least through June, the last month of observation in the CCP used in the study. These improvements appear widespread across groups with different incomes, education, and living in rural or urban areas. Not all changes are statistically significant, however.

Before the pandemic, Black consumers had lower financial well-being and were more likely to have difficulty paying a bill or expense than non-Hispanic white consumers on average. This divergence persisted and may have even increased during the pandemic, although the increase is not statistically significant.

Figure 1: Consumers were much more likely to face income drops during the pandemic. (“In the past 12 months, has your household experienced a significant drop in income from any of the following?”) 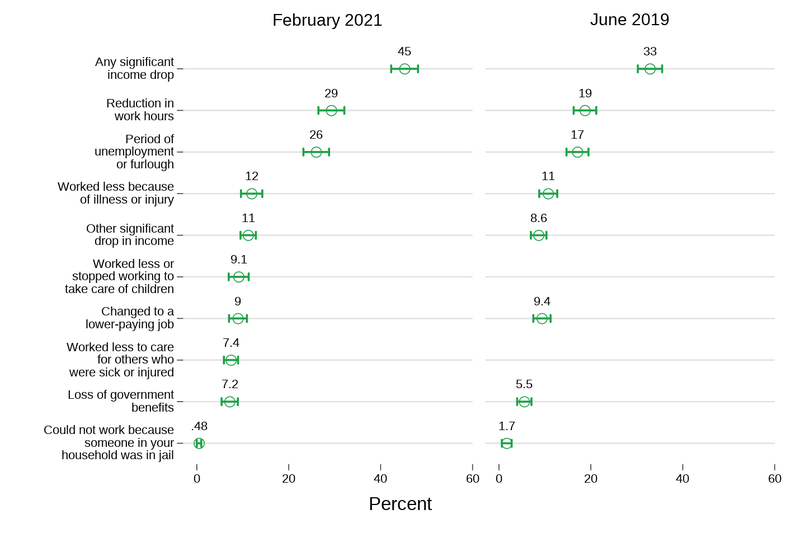 Figure 2: Consumers experiencing a significant income drop were less likely to have difficulty paying a bill or expense during the pandemic. 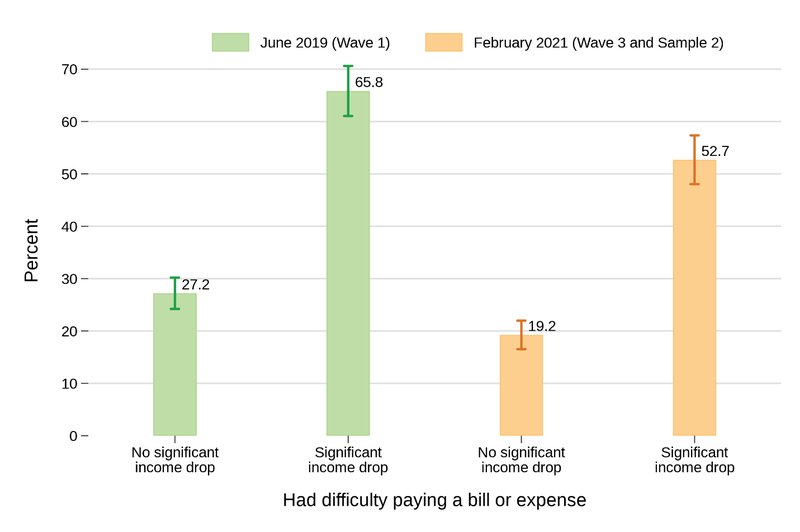 What explains this change? Pandemic assistance policies appear to have helped keep these financial difficulties from hurting the average consumer’s financial health. For example, among workers with a large income drop due to unemployment, workers who had to wait longer than four weeks to receive unemployment insurance benefits, or who never received any, were much more likely to have difficulty paying their bills than those who received benefits earlier. While workers who had to wait for unemployment benefits may eventually have received enough to make up for lost income, 42 percent report waiting four or more weeks. Many consumers received flexibility or forbearance on their mortgages, student loans, credit cards, and other loans. Credit card debt and credit card utilization rates fell for consumers who received this flexibility. And credit card debt increased and decreased as cash assistance policies started and stopped.

Will consumers’ financial health decline quickly as these policies end? The answer depends on many factors including the pace and equity of the economic recovery, how consumer spending changes, the evolution of the continuing pandemic, and future policies. As these pandemic policies come to an end, it will remain important to continue to monitor household financial distress.