Over 1.2 million adults ages 60 and older lost a spouse in 2019. Many recently widowed older adults own their homes with significant home equity, and a third of them spent at least 30 percent of their income on housing. Newly widowed older adults also face higher poverty rates and challenges to getting the help they need. Using public data from the Census American Community Survey, this spotlight describes key demographic characteristics and the financial circumstances of older surviving spouses to highlight opportunities for improving the financial well-being of this population.

The number of people experiencing this life event exceeds the population of several states.2 The CFPB is committed to ensuring that surviving spouses are treated fairly in the consumer financial marketplace, particularly those who are dealing with mortgage, student loan, medical, or credit card debt.3

Complaints submitted to the CFPB by older consumers provide some insights into the financial challenges that surviving spouses face. In consumer complaints, surviving spouses have explained that the loss of a spouse’s income makes it more difficult for them to meet their debt obligations. Surviving spouses also have reported attempts to collect credit card debt they do not owe.

Insights from complaints submitted to the CFPB by older consumers

"I am unable to pay this debt, as I am faced with both the loss of income from my husband's death and my own income due to the COVID-19 Pandemic. I am working hard to pay my own credit accounts and that is all I can do. I requested that the amount owed on this … card be reduced or that interest accrual be stopped so that I had some chance of paying the balance incrementally."

"I am an older widow who contacted a credit card company after my husband passed away. I explained that the bills coming were for a credit card issued to him, not to me. The original paperwork shows the card belonged to him. No charges had been made to the card in the years prior to his death. Now, the credit card company has added my name to the card without asking permission. In turn, I have been paying the bills as they come in, now paying over $5000.00 on a $4000.00 balance."

"My husband died recently and I have been disputing a "joint" status on a credit card for many years. I called the card company and advised them of his death and then I demanded to see a credit application with my signature. I have the original paperwork and it's in my husband's name only. He has no estate. They have not sent the documentation. Instead, they sent a new statement in my name only."

Surviving spouses are more likely to be women, over the age of 80, living alone, and not currently employed

The racial and ethnic characteristics of new surviving spouses normally track those of the general population. However, as the result of the COVID-19 pandemic’s disproportionate impact on the oldest segment of the population as well as in certain racial groups, data for 2020 and 2021 may reveal a demographic shift in the profile of older surviving spouses.

Demographic, social and household characteristics of the older population and older surviving spouses, 2019 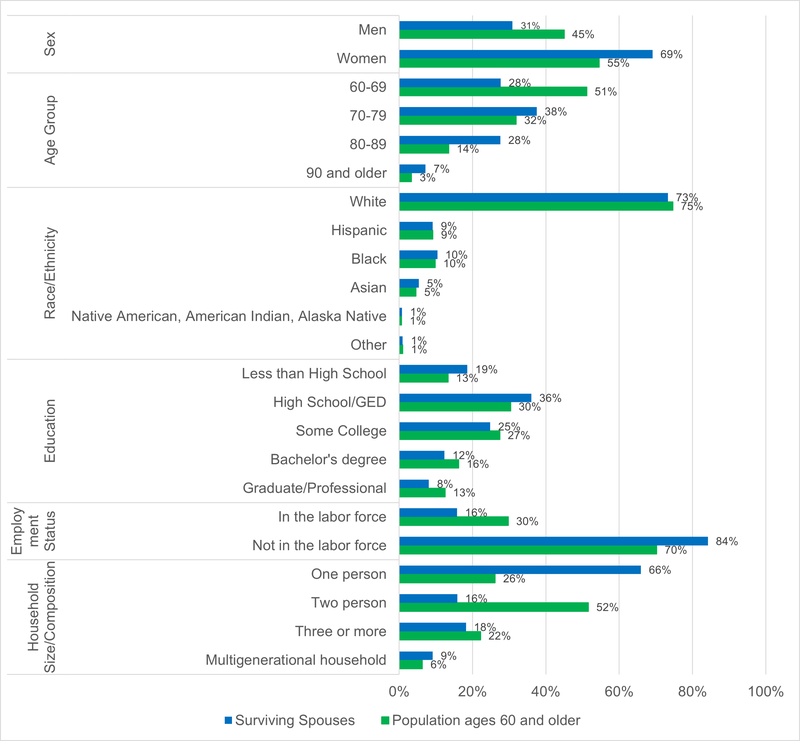 Among older renters, 67 percent of new surviving spouses spent 30 percent or more of their income in housing compared to 57 percent of all older adults. These pre-pandemic findings reflect high rates of housing insecurity among recently widowed individuals heading into the COVID-19 pandemic, which research shows generally exacerbated insecurity and housing costs for many older renters and homeowners.4

Surviving spouses face higher poverty rates, but they are less likely to get help with food and healthcare costs

A large number of studies have documented the impact of widowhood on the income of surviving spouses, with newly widowed individuals experiencing an average income drop of 11 percent even after accounting for household size and reduced needs.5

Comparison of poverty rates between adults ages 60 and older and new surviving spouses, 2019

The analysis suggests that there are missed opportunities to help low-income surviving spouses. For example, newly widowed older adults with incomes below the poverty line are likely to qualify for both the Supplemental Nutrition Assistance Program (SNAP) and Medicaid. Yet the analysis shows that more than half (58 percent) are enrolled in neither program. Surviving spouses are likely to interact with a variety of federal and state agencies as they address legal and financial matters related to their deceased spouse. These interactions provide an opportunity for benefits screening or referral to address the underutilization of benefits. 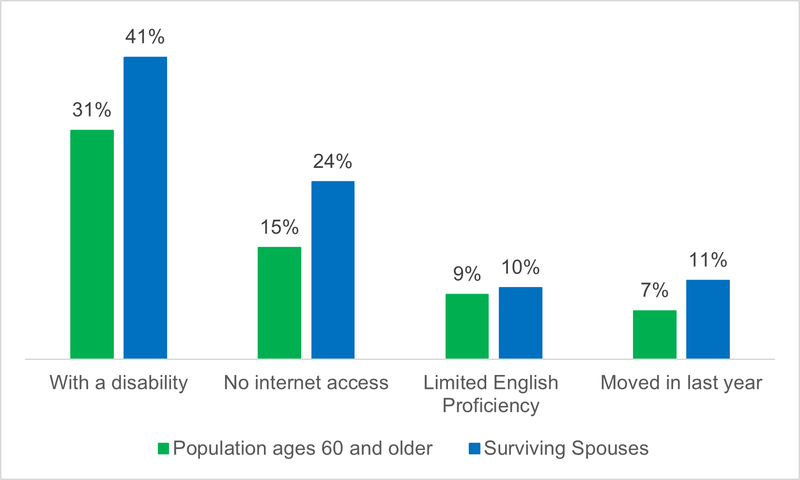 Policy, programmatic and educational interventions must take these challenges into account. In order to be effective, interventions also must involve family caregivers, community organizations, and social service providers (such as service coordinators in federally-subsidized housing) who provide critical support to these older adults.

Financial workbook for surviving spouses: Figuring out how to manage your finances, on top of the grief of losing a spouse may feel overwhelming. This step-by-step guide is designed to help you do the most important and pressing things first.

1. For more data on COVID-19 deaths by race/ethnicity and age, see https://www.cdc.gov/nchs/nvss/vsrr/covid19/health_disparities.htm#RaceHispanicOriginAge

3. For example, if a mortgage borrower dies, existing CFPB rules require that servicers have policies and procedures in place to promptly identify and communicate with family members, heirs, or other parties, known as ‘successors in interest,’ who have a legal interest in the home. Confirmed successors in interest will generally receive the same protections under the CFPB’s mortgage servicing rules as the original borrower.

To develop this fact sheet, CFPB staff analyzed respondent-level public use data from the Census Bureau’s American Community Survey 1-Year Estimates 1-Year Estimates-Public Use Microdata Sample 2019. The American Community Survey is an annual survey conducted by the US Census Bureau. The survey is sent to a sample of about 3.5 million addresses in the 50 states, District of Columbia, and Puerto Rico. It covers a range of topics such as education, employment, internet access, language use, and transportation. Response to the ACS is required by law. More information about the ACS is available at https://www.census.gov/programs-surveys/acs/about/acs-and-census.html . In addition to the Census data, in this spotlight, the CFPB provides specific complaint examples that highlight relevant issues. Please note that each narrative is specific to the individual consumer who submitted the complaint and is not statistically representative of all consumers’ experiences.

The ACS specifically asks (Question 21): What is this person’s marital status? (Question 22): In the Past 12 months did this person get… Widowed?. This Data Spotlight focuses on older adults who responded YES to this question. The percentages and numbers are based on weighted responses using person or household weights as appropriate. The report relies on data from the 2019 1-year estimate, the most recent one-year public microdata available. In 2021, the U.S. Census Bureau announced that it was not going to release its standard 1-year estimates from the 2020 ACS because of “the impacts of the COVID-19 pandemic on data collection."

Survey data, methodology and other technical documentation for the Public Use Microdata Sample File is available at: https://www.census.gov/programs-surveys/acs/data.html