The report shows how credit records co-evolve with military service, from age 18 through age 24. The analysis compares servicemembers who entered the military between 2007 and 2015 based on the age at which they join active duty and based on the time they spend on active duty. It also compares servicemembers’ credit profiles to the credit profiles of civilians.

The report analyzes data from the Bureau’s Consumer Credit Panel (CCP) supplemented with data on military service from the Department of Defense’s Servicemembers Civil Relief Act (SCRA) database. The CCP is a nationally-representative 1-in-48 sample of consumer credit records. Previously, the Bureau released a report on mortgages to first-time homebuying servicemembers using this combined CCP/SCRA dataset. 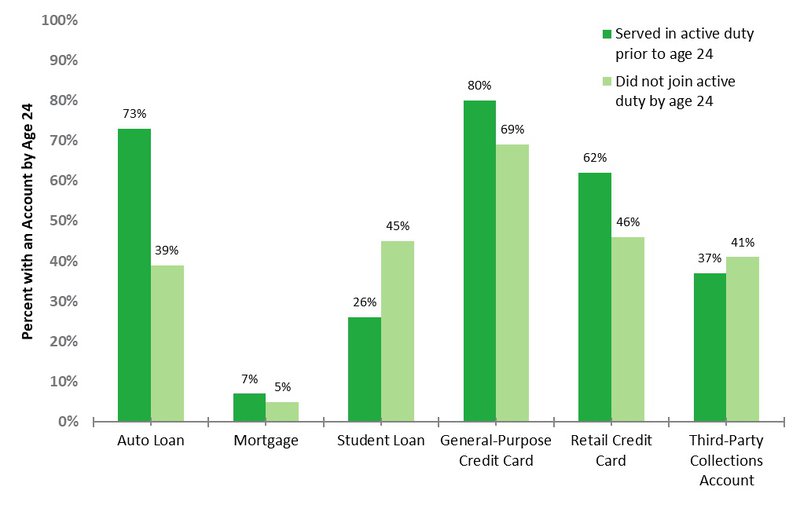 Servicemembers who complete at least three years of service have better credit records by age 24 than servicemembers who leave the military sooner. They have lower rates of delinquency and default, and are also less likely to have non-credit debt in collections, such as a cellphone bill or a utility bill. Servicemembers who serve longer than five years, some of whom have reenlisted and continued in service past their first term of duty, have lower rates of delinquency and better credit scores than civilians who never joined active duty. The graph below shows that 35 percent of these servicemembers maintain super-prime credit scores at age 24, compared to 26 percent of civilians who never joined active duty.

Credit scores at age 24, by amount of time spent in active duty service 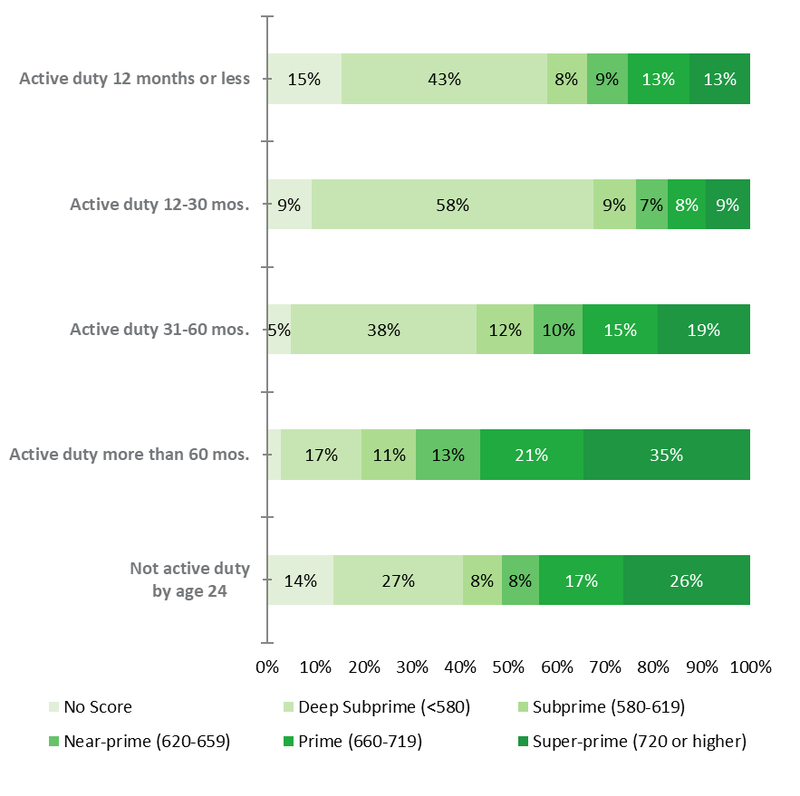 When servicemembers exit, their credit scores decline over the next six to twelve months by an average of more than 20 points. For those who experience a decline, it is often due to a delinquent payment or a default such as an account charge-off, vehicle repossession, or an account being sent to collections. These declines are observed on average for all age groups, no matter the time spent in service, but are most significant for servicemembers who separate with between 12 and 30 months of service. For those servicemembers credit scores decrease by almost 60 points in the year during which they leave the military. This decline leaves 58 percent of these servicemembers with a deep subprime credit score at age 24, as shown in the graph above.

The Bureau and the Department of Defense (DoD) use research like this to guide their financial education and outreach programs. Research can illuminate gaps in financial education, and it can also provide a benchmark to measure the effectiveness of changes to programs over time. For example, pursuant to the 2016 National Defense Authorization Act , DoD began providing financial literacy training at various “touchpoints” throughout a servicemember’s career. When the first cohorts to receive this training start to complete their terms of service, follow-up research could gauge the effectiveness of those changes by comparing how their credit-related behaviors differ from the pre-2016 sample used in this report. This report provides a foundational comparison for future work on servicemembers’ credit behavior.

Dr. James Marrone is an Economist in the Office of Servicemembers Affairs at the Consumer Financial Protection Bureau. Dr. Susan Carter is an Associate Professor of Economics at the United States Military Academy. Mr. Andrew Cohen is the Director for the Office of Financial Readiness in the Office of the Deputy Assistant Secretary of Defense for Force Education and Training.