Personal finance experts and your friends and family may all have an opinion on how you should manage your savings and your debts. We set out to see what people would do when presented with a hypothetical scenario with the opportunity to pay off debt using available savings.

Findings from our online experiment with hypothetical scenarios suggest:

Studying the trade-offs between keeping savings and paying off debt helps us understand how people view risk around their finances and the importance of savings for financial security.

How we came to our findings

We ran an experiment with 551 people. In the experiment, people were presented with a hypothetical scenario about a person named Mr. Green.

“Mr. Green has $5,000 in credit card debt. He has [$X] in a bank savings account. He has no other savings except in a retirement account, which he cannot access. How much, if any, of the $5,000 credit card debt should Mr. Green pay out of the [$X] available savings?”

With this design, the savings amounts varied across participants such that the amounts of savings were either not enough, just enough, or more than enough to cover the debt.

Participants were cautious about having too little in savings. In nine out of ten scenarios about Mr. Green, less than half of participants used the maximum amount of savings available (in the figure below, the dark green bars on top are smaller than 50 percent).

Only when the amount in Mr. Green’s savings was double the amount of the debt (in the figure below, the dark green bar on the far right), did a majority—77 percent—of participants use the maximum amount of savings and pay off the debt.

The fact that those with $10,000 behaved so differently may be because people feel more comfortable using savings after achieving a certain amount, or a certain amount relative to the thing they want to use the savings for.

This raises the question, how much of a savings cushion is enough? Previous CFPB survey results show the median amount people report they need in savings for an emergency is $10,000 , so it is possible that participants viewed amounts smaller than $10,000 as too low to risk spending more on debt reduction. 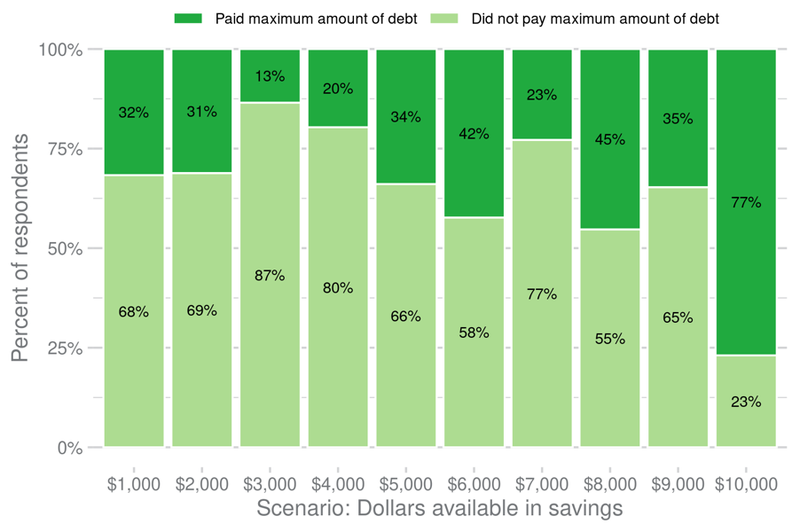 Finding: Most participants put more than half of savings toward paying down debt

Participants also wanted to pay off debt. The figure below shows that, on average, in each of the 10 hypothetical savings scenarios, participants allocated more than half of Mr. Green’s available savings to the $5,000 credit card debt.

In nine out of the 10 savings scenarios, for example, participants allocated an average of between roughly a half and three-quarters of the savings they could to debt reduction. 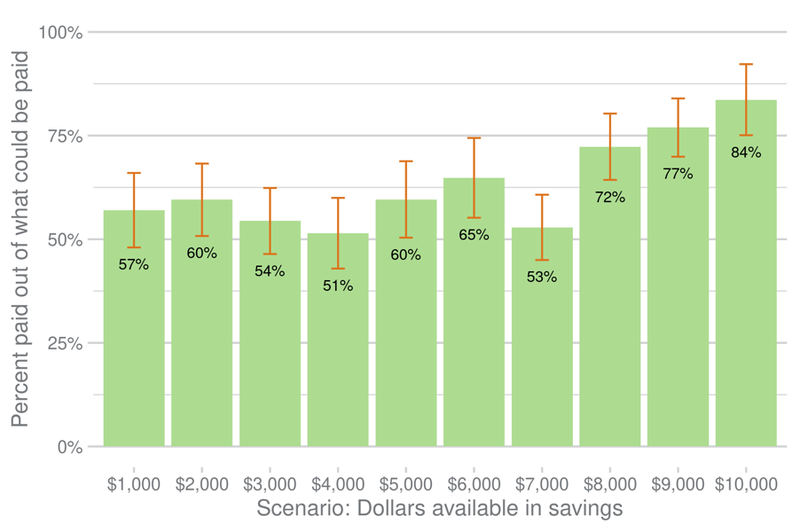 Together these results suggest that the savings-debt trade-off is a balancing act. On average, participants put a good amount of the savings (50 to 85 percent) toward paying off debt and preserved the rest as a savings cushion.

Learn more about our savings research

While this experiment focused on decisions in a hypothetical context and the sample of participants is not nationally representative, we think it’s an important starting point for understanding how consumers make trade-offs between savings and debt. This builds on our continued research into savings.

If you’d like to learn more about this experiment, check out our research brief: Balancing savings and debt: Findings from an online experiment.