This is the post second in a series. Yesterday, we looked at the origins of the Know Before You Owe project for simplifying mortgages. Today, we look back at how the project unfolded. Very soon, we’ll issue a new proposed rule to make mortgage disclosure more effective and easier to use.

In our last post, we mentioned that one question that we asked people to consider was: “What would you like to see improved on the form? Is there some way to make things a little bit clearer?” Soon, we’ll propose the rule that implements new mortgage disclosure forms, and you’ll be able to judge whether they’re better and clearer than the existing forms. (To get a message when we do, sign up to the right.)

For today, we want to take a look back at the work we did with your input to get to this point. This post is a little longer than most of what we write on this blog, but this partnership with the public has produced results that deserve a lot of recognition.

In November 2010, we joined the Treasury Department to host a symposium on mortgage disclosure with consumer advocates, government officials, psychologists, marketers, and representatives from the mortgage lending industry. The day was a jumping-off point for our efforts, a way to share and collect ideas for what kind of changes in disclosure would help consumers.

Before we could test forms, we needed forms to test. We needed something more specific than “What should we change about the current forms?” to give our testers some direction on what we were trying to achieve. So, starting with a blank piece of paper on a wall, we asked ourselves two questions: What information about the mortgage is useful to consumers? What information is useful to the industry? By using these questions as the framework for the forms’ legal requirements, we came away with a series of drafts that let us begin testing.

The testing process took us to cities across the country: Baltimore, Los Angeles, Albuquerque, Springfield (MA), and more. In each place, we tested new prototypes of the combined initial disclosure with different kinds of mortgages, different terms, and different comparisons of loans. For a few days in each city, we asked consumers, lenders, and mortgage brokers questions about our prototype forms. This exposed issues with the designs we were testing and made sure our design process was always user-centered.

As we were testing, we were also wrestling with another issue: how the new disclosure consumers receive after they apply for a loan would work with the disclosure consumers receive before they close on the mortgage. These forms need to work together. Consumers should be able to understand whether the final terms and costs of their loan have changed from the initial estimates.

To address this, after six months of testing the initial disclosure, we began testing a new combined closing disclosure. This form combined the HUD-1 Settlement Statement with the final Truth in Lending disclosure. We tested versions of this form in cities across the country like Des Moines, Birmingham, and Austin. 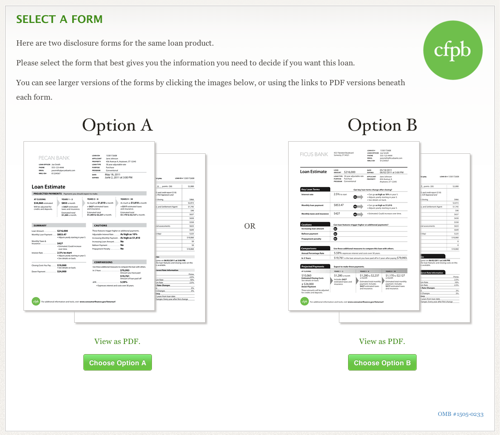 At the same time we began in-person testing of the initial disclosure in Baltimore in May 2011, we also posted the first two prototypes for comparison here on consumerfinance.gov. We created an online feedback tool that let people choose between two different prototypes, and then click on the parts of the forms they thought worked well or didn’t, found confusing or interesting, had suggestions for. Basically, we wanted any reaction that could help us learn and improve. They could then submit a comment telling us why they clicked on a particular part of the form. We also asked if there was anything missing.

The feedback was overwhelming. Over seven rounds of this online feedback tool, we received more than 27,000 user comments, split almost evenly between consumers and industry. And we used this feedback in a variety of ways. For example:

As we began focusing on writing the rule to implement new disclosure requirements earlier this year, we also started the small business review process. Mortgage disclosure is important to a variety of small businesses, such as lenders, mortgage brokers, and settlement agents. We asked for their feedback on the potential impacts of complying with various proposals we were considering.

When we release the proposed rule and forms, we’ll also release reports on both the testing that led us here and the small business review that gave us feedback on particular proposals. The reports will offer some context for the heart of the work: the new proposed rule and the forms.