According to the Maine Attorney General’s Office, there are an estimated 14,000 incidents of elder abuse annually in Maine, and at least 84 percent of them go unreported. There are many types of elder abuse, including financial exploitation, and it’s important to increase our understanding of how to spot and prevent it.

On Monday, Dec. 12, my team and I traveled to Portland, Maine, to participate in a roundtable hosted by the Maine Association of Area Agencies on Aging (M4A) with state government officials, a district attorney and other law enforcement officials, and leaders from senior groups and the financial services industry.

We were impressed by their level of dedication and commitment to assisting Maine’s aging population, as well as the close partnerships formed by the diverse group of people who sat around the table.

Jessica Maurer, the Executive Director of M4A, informed us that several months ago, Maine elder abuse leaders – including many who attended the Dec. 12 roundtable – had participated in an Elder Abuse Leadership Summit. Together, the elder abuse leaders committed to forming the Maine Council for Elder Abuse Prevention, a volunteer group to coordinate efforts to combat elder abuse, neglect, and exploitation throughout Maine.

Evert Fowle, the District Attorney of Kennebec and Somerset counties, noted that while more collaboration is needed, there are already good practices in Maine. For example, his office was part of the Elder Justice Training Partnership, which trained over 500 professionals statewide to better address elder abuse, and that he recently coordinated with Maine bankers as well as with adult protective services to refer cases to his office.

Following the roundtable, I had the opportunity to speak at a town hall meeting in the Portland Public Library. Seniors, caregivers, and professionals came from across the state to learn about how they can avoid scams and fraudulent activities directed at the elderly. They also came to share their own personal stories. One woman told a story about someone she knew who had been called by a scam artist. The man on the line pretended to be a grandchild who had been arrested in a foreign country and asked for money to get out of jail and return home. I was thankful that she had the courage to speak up so that others could see that they were not alone. Maine’s NBC Station, WLBZ 2, captured some footage of the town hall.

In addition, I had the opportunity to meet with Attorney General Bill Schneider to discuss how the CFPB could work with his office and other Attorneys General to better identify and address elder financial abuse across the country.

After an eventful day of meetings, my team and I spoke with the Maine Bankers Association and the Maine Credit Union League. Both a community banker and a credit union representative noted that is difficult to train their staff to recognize when a customer or member is being scammed and how to best help him or her solve the problem quickly and effectively. Despite these difficulties, we were impressed to see that they were committed to serving their customers by retraining their staff every couple of years to detect new scams and fraud.

I look forward to continuing this dialogue with seniors as I plan more trips around the country in the upcoming weeks and months. 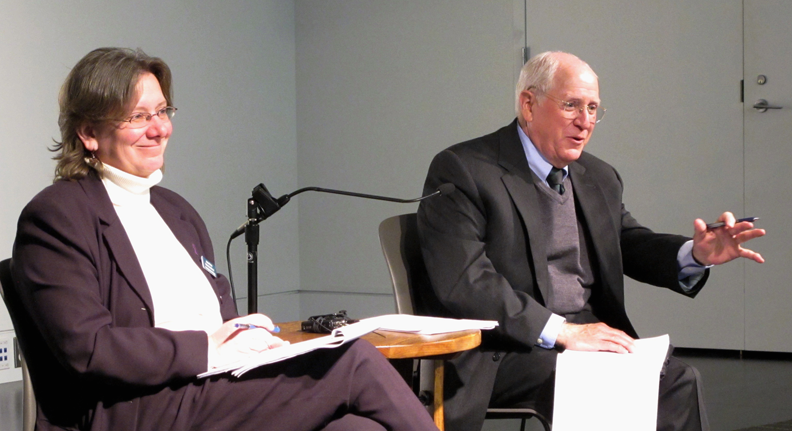 Skip Humphrey in a town hall with seniors, caregivers, and professionals in Portland, Maine