Our regional directors in CFPB’s Office of Supervision Examinations serve consumers from coast to coast. These dynamic individuals come from both the private and public sectors and bring extensive knowledge of consumer financial protection and regulatory compliance. They are the face of the CFPB across the country. 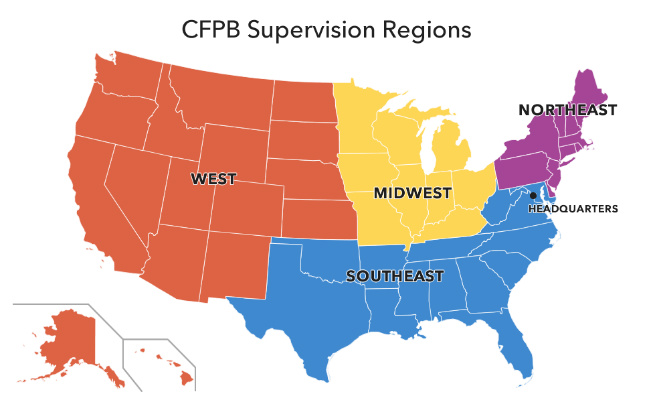 Edwin is one of the founding members of the CFPB, and he joined the implementation team in September 2010. Edwin brings 26 years of experience serving as acting regional director, regional deputy director, and assistant regional director with the Department of the Treasury’s Office of Thrift Supervision, and its predecessor agency, the Federal Home Loan Bank of San Francisco.

Edwin holds an MBA in Finance from San Francisco State University. He is a graduate of the Pacific Coast Banking School as well as the Department of Treasury’s Executive Leadership Program.

Anthony is the newest addition to our Regional leadership team and brings with him a wealth of private sector experience in financial services, audits, and compliance. Anthony joins us after 19 years with HSBC where he worked in a variety of capacities including executive vice president and COO of Legal and Compliance and head of Management Support for the HSBC Private Bank in Europe. He was also chief compliance officer of several business units and internal auditor. Prior to his time at HSBC, Anthony worked as an auditor at Price Waterhouse.

Anthony has a CPA and CISA and holds an MBA from the University of Chicago.

Steve joined the Bureau in September 2011 and brings with him substantial experience in law, financial services and financial regulation from both the private sector and state perspectives. From 2007 until September 2011, Steve served as Pennsylvania Secretary of Banking. In that role, he led the Department of Banking’s regulation of the Commonwealth’s 250 state-chartered banks, thrifts, credit unions and trust companies as well as its 14,000 plus non-depository licensees. Prior to this period, Steve worked at the Mellon organization for 25 years.

A Philadelphia native, Steve began his career as assistant district attorney for the city. Steve holds a JD from Temple University.

Before joining us in October 2011, Jim served as senior associate director in the division of banking regulation at the Federal Housing Finance Agency. Prior to this period, Jim served as associate regional director for examinations in the Atlanta Regional Office of the Securities and Exchange Commission. Jim began his federal career at the Commodity Futures and Trading Commission where he served in multiple capacities including attorney-advisor, deputy director for audit and financial review, and special counsel.

Jim holds an MBA from the University of Texas at Austin and a JD from George Mason University.

Our regional staff are distributed throughout the country and are aligned with one of the four regions, which have physical regional headquarters in San Francisco, Chicago, New York, and DC respectively. These teams work hard every day to protect American consumers!